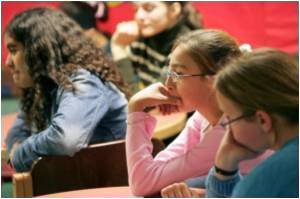 There was a time when talking about sex simply did not happen. That was many moons ago. Now, teens are beginning to have sex at younger and younger ages, and this changes the playing field. Everyone knows that parents need to talk to their kids about sex education, but the lines are not as clear about sex education in school settings. How can we educate our children about sex without endorsing it and should that be a decision made by our school system? This is just one of the many considerations on this important social subject.

On the one side we have Abstinence and on the other safe sex practices. In lue of listing out all the pros and cons of the two schools of thought I’m going to say this plainly. Abstinence is a tool for those either too ignorant to see the reality of the world today or too scared to talk candidly about sex and safe sex practices will be beneficial to those who are mature enough to grasp and understand the consequences of sexual activity.

With less time available to teach these subjects, there is also a possibility that the units related to sex education get the short shrift. There is also a good chance that there is less oversight over sex education; politicians have a natural tendency to ignore policies that they cannot afford to enforce.

Parents, schools or caretakers offer it in some parts of the world to educate the children, who are stepping into their adolescence. If formally received, sex education is either taught as a full course at high school or junior high school level or in biology, health, home economics classes. Teaching sex education is rather a controversial issue; debates have been going on for several decades discussing if it should be taught formally in schools or not.

Sex was “totally revealed” in junior high school and high school but not in the classroom. We were now associating with girls and we played such games as “Post Office.” We often mentioned the game “Pony Express,” which was said to be “Post Office with a little more horsing around.”