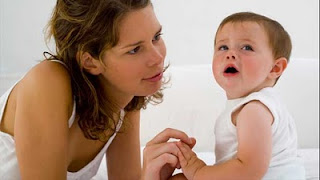 A croup cough is a very serious illness. It starts out as a simple cough but it requires your constant care.I had never heard of the croup until just before my son’s 1st birthday. I hope my experience will help others recognize the croup cough symptoms early.

Croup Cough is a viral infection which mostly affects small children. It causes the trachea (windpipe) and larynx (voice box) to swell, which results in the harsh “barking” cough associated with croup. This cough often lasts 5 to 6 days and is more common during the winter months and early spring.

First of all, croup is most often caused by the same viruses that cause the common cold. Two kids can get the same virus, and one will get croup and the other may not. My other son has never had any symptoms of croup. Some children seem to be more prone to this illness than others. Research has shown that children born early or who have breathing problems such as asthma are more prone to getting croup.

Children most prone to Croup lie in the age group of six months and three years. They are more prone to this viral infection during the late fall, winter and early spring. The common symptoms of Croup Cough are a runny nose and a brassy cough. These symptoms generally develop about 2-6 days after being exposed to someone with croup.

The swelling of the tissue around the layers of the voice box or windpipe is called Croup. The croup results in a tight and barking cough. As the child’s windpipe is narrow, it affects the breathing of the child. Though, older children and teenagers also suffer from it, the croup usually attacks infants or the children under the age of five.

There are many homeopathic medicines which will help resolve the acute symptoms of croup. But it does depend very much on where in the cycle this condition is when you start the homeopathic treatment.